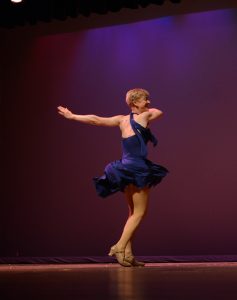 I turned 62 on my last birthday. I have never allowed my age to deter me from enjoying my avocational interest in tap, ballet, and jazz dancing. As a senior living advisor and former, part-time amateur children’s dance teacher of 13 years, I am pleased to see senior communities offering dance therapy classes to their residents. In addition to founding and leading ADSLA, I have also taught tap and ballet in several senior centers and in the dementia area at The Arbor of Naperville. On a number of occasions, I was made aware that several of the class participants also had Parkinson’s disease.

Exercise that is performed several times a week is not only fun, it also can help to elevate a person’s immune system and make one feel better about oneself. That is because of the endorphins that are released. Exercise classes provide camaraderie while encouraging seniors to move all of their body parts. If a person moves his or her limbs, it increases hand to eye coordination, strengthens the core muscles, and improves balance.

I approached the senior classes as I would have approached instruction at any other basic level: I included combinations and repetition to Frank Sinatra and Bobby Darin songs. I observed that most of my “students” found ease in doing the tap warm ups, and some jazz movements, even if they were confined to a wheel chair. Many of the participants said that their joints felt better, their overall movement improved, and, most importantly, their spirits had been lifted. After the class had finished, we’d talk for a while. Some of the residents with dementia would reminisce about where they used to go to dance with their spouses. Several residents remembered their teacher’s names, and where the studios were located. The repetition of certain exercises helps people with Parkinson’s to concentrate on movements that have become difficult for them, such as doing two things at once. People who have suffered a stroke are able to express themselves by moving to the music, even though they can’t talk. Sometimes individual’s medications stop working for them and the classes give them relief from their symptoms.

Dance therapy actually started over 50 years ago when the classes were offered to psychiatric patients at St. Elizabeth’s Hospital in Washington, D.C. The National Academy Of Dance Therapists reports there are now more than 1,200 dance therapists in the country. However, not all of the classes are conducted by formally trained therapists, and some are not formally trained dancers.

There has been a significant amount of outreach to professional dance companies to teach dance therapy classes, and some of them are jumping on board. This is great news for older Americans, and for several very important reasons. I work with a number of seniors who have been diagnosed with major depressive disorders. Their biggest complaint to me is that anti-depressants don’t take away the pain of depression. Rather, the drugs only lessen the symptoms. Nothing alleviates their depression more than conversation and socialization. I have been lucky enough to refer them to dance programs where they can exercise and socialize.

Let the senior living experts at Andrea Donovan Senior Living Advisors show you how we can ease the burden on you and your loved ones! Call us at (708) 415-2934 or email us. Please visit our website. Please watch my video to learn how the process works and learn what some clients have to say.