I was fortunate enough to be interviewed for a blog post by my colleagues at Lexington Square regarding caregiving tips for a spouse. I would like to share them with you.

When it comes to caregiving to a spouse, there may come a time when additional help and support are needed.

In this helpful Q & A with Andrea Donovan of Senior Living Advisors of Inverness, she offers expert insight on how to best handle this situation, how to overcome caregiver guilt and how to create a social and wellbeing experience for both the caregiver and spouse.

END_OF_DOCUMENT_TOKEN_TO_BE_REPLACED

I recently had the wonderful opportunity to be interviewed on the Silver Solutions Radio show. It airs on WMRN 1410 AM in Elgin, Illinois. It is hosted by Jeanette Palmer, Jim Wojchiechowski, and Kathleen Wetters, who each independently own a Right At Home non-medical home care agency. During the interview, they graciously gave me a chance to explain how I started my career in the senior housing industry as the Admissions and Marketing Director of the St. Andrew Life Center (Now Glen St. Andrew) in Niles, Illinois. It was a faith-based community that offered three levels of care, including independent living, assisted living, and a nursing home on one campus. I was receiving so many telephone calls (mostly from the children of seniors who were calling me from the Yellow pages) from people who didn’t know how to solve their senior loved ones’ problems. I saw a niche for a consulting business. So in 2006, much to my husband’s dismay, I opened Andrea Donovan Senior Living Advisors in 2006.

I started my senior housing placement consulting business by touring and evaluating over 150 senior living communities in the Chicago metro area. I looked at cost and methods of payment accepted, levels of care, staffing, and quality of care. Then I also evaluated quality of life factors such as cleanliness, menus, activities, and apartment and room layouts. So, when a family needs my services, I make a face to face evaluation of the senior, their financial realities, and the location preferences of the family. Then, I select the options that fit the senior’needs so families aren’t wasting time touring places that simply won’t work long-term.  At this point I have toured and evaluated close to 500 senior communities in the Chicago metro area.

We also shared a very frank discussion about the costs of placement in a senior living community versus the costs of staying at home in the Chicago metro area.  We talked about the advantages and disadvantages of each option.

END_OF_DOCUMENT_TOKEN_TO_BE_REPLACED

After I have completed the task of finding the perfect senior living option for a senior loved one, many of my clients are faced with selling the senior’s property. I have asked my colleague, Senior Real Estate Specialist (SRES) Roz Byrne, to offer advice on that subject:

It’s an age-old question, and as we age it gets even trickier to determine how much work or money we should put into our homes.

When it’s time to sell the family home, seniors’ homes tend to present themselves in one of three ways:

END_OF_DOCUMENT_TOKEN_TO_BE_REPLACED

My client was 102 years old and had lived in the same independent living community for more than 12 years. She had moved there with her husband when the community was a homey retirement home. After her husband’s death, she remained there with 2 part-time caregivers who provided total assistance with bathing, dressing, escorts to the dining room via wheelchair, and transporting her on errands. She was alert.

When I went to assess the client, I was greeted by 5 family members who were gathered in her lovely 2 bedroom apartment. As they explained to me, the community had been purchased by another organization that was turning it into a glamorous, high-priced, marble-clad independent living community. As I was listening to them, I noticed a baby grand piano occupying the corner of the room. And at one point during the conversation, the caregiver assisted my client with being seated at the piano. She delighted me by playing a wonder rendition of George M. Cohan’s work, “Give my regards to Broadway.” She could still play despite needing help with other activities of daily living!

END_OF_DOCUMENT_TOKEN_TO_BE_REPLACED

Five years ago,  I was called at the last minute to act as Power Of Attorney (POA) For Health Care for an 85 year-old  woman.  It was the day before she was to move to independent living at a retirement community. Independent living used to mean that the senior can basically function on their own with some assistance with meal preparation and housekeeping. Now there are a lot of ala carte services that can be brought to the senior’s independent apartment, allowing him/her to remain there without changing to the assisted living level of care. The woman’s former POA had moved out of state and had written her a formal letter of resignation. A trust company had been appointed to act as her Power of Attorney For Finances.

END_OF_DOCUMENT_TOKEN_TO_BE_REPLACED

“There’s no place like home for the holidays,” sings Perry Como in the Christmas classic composed by Robert Allen and recorded in 1954. But despite the wonderful lyrics of writer Al Stillman, sometimes you can (and maybe even should) reconsider what best constitutes “home sweet home.” For a senior whose health or faculties are failing, or who would benefit from greater socialization and/or daily living support, the holidays can be a good opportunity for family members to bring up life planning for the new year. It is, after all, one of the few times of the year when loved ones gather and may pause to converse leisurely around the kitchen or dining table.

Here are three tips to consider this holiday if you are trying to convince a senior to move or even simply trying to bring up this often delicate subject:

Do not use words such as “nursing home” or “facility” or “institution” during a conversation with the senior. Instead, use the words “retirement community,” “continuing care retirement community,” or “alternative living option.” A lot of seniors have awful memories of a loved one living in an old-time nursing home, with few to no amenities, and little sophistication with regard to geriatric needs. Your older loved one might not realize how senior living communities have changed. They are not your Grandma’s nursing home anymore!

END_OF_DOCUMENT_TOKEN_TO_BE_REPLACED 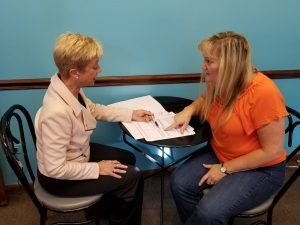 How in the world are busy professionals who also have growing children supposed to find the time to handle their aging parents’ issues – both health and living arrangements?

More and more of them are turning to experienced professionals who have experience in the field and can assist with everything finding the most cost effective and person-centered elder care, to interviewing potential home caregivers, to dealing with legal and financial specialists, to acting as a liaison to Medicare and long-term care insurance companies and even to paying bills.

Chicago Senior Living Advisors, based in Inverness, provides personalized Geriatric Care Management which is designed to assist family members or other unpaid people who are caring for an elderly or cognitively impaired loved one, according to Andrea Donovan, president.

END_OF_DOCUMENT_TOKEN_TO_BE_REPLACED

Elder abuse is a crime. It can occur whether your loved one is at home, attending adult day care, or living in a senior living community. And like any other crime, you have an obligation to report it. This month, I have asked one of my trusted partners, Mike and Mary Doepke of Home Helpers Home Care of Hinsdale, to share some information on Elder Abuse:

From all outside appearances, 80-year-old Shirley seemed well cared for by the niece who had moved in with her a few months earlier. She even told her friends how she was enjoying the company and the help around the house.

Shirley had always been frugal with her credit cards, using them only when needed. So when the bank called to ask her about some recent, unusual charges on her account, she was alarmed. She was even more surprised to find out that the purchases were made by the niece she had welcomed into her home.

END_OF_DOCUMENT_TOKEN_TO_BE_REPLACED

When I started serving in the senior living industry over 15 years ago, all communities included three meals in the rent. Three meals were just part of the senior’s care package, whether the level of care be independent living, assisted living, or skilled nursing home.

While that still holds true today for assisted living or nursing home care, the meals/food picture has changed in the independent living landscape. Most independent living communities are offering one main meal per day, with the choice of paying for 2 extra meals on an ala carte basis. Other independent living organizations are offering “flex dollar” arrangements, where the senior is given a fixed dollar stipend on a monthly basis. The flex dollars can be used to purchase meals, haircuts in the salon, or other amenities the community has to offer.

END_OF_DOCUMENT_TOKEN_TO_BE_REPLACED

I remember fifteen years ago when I started as an Admissions and Marketing Director in the senior living industry, my future boss took me on a complete tour of the community. Or so I thought.

The community included independent living, where most of the seniors were well off mentally and ambulated with, at worst, a cane. The next level of care was assisted living, which at the time was an extension of independent living. But, the residents at that level received “standby” assistance with bathing, dressing, toileting, transferring, eating, and walking. At worst, seniors there ambulated with the help of a walker. No wheel chairs were allowed. Last, there was nursing home level, or the dreaded fifth floor that was reserved for residents who could no longer function at the independent living or assisted living level. Most were in wheel chairs and needed total assistance with their activities of daily living. Or, some suffered memory impairment and were at risk for wandering. The fifth floor was equipped with a security code for the elevator and an alarm for those residents who might attempt to leave unattended.

When my boss conducted the tour, he showed me the independent living and the assisted living areas, both of which were places where the residents appeared to be happy. However, after I began working there, I was sent to complete a task on the fifth floor where the residents needed total assistance with everything. Being new to the industry, I was like many of my clients taking a tour of a nursing home for the first time. I was nervous and terrified! I rushed down to my boss’s office and told him that I was exceedingly upset that I was not told that the fifth floor existed. As time went on, I grew to love the residents on the fifth floor. There we were encouraged to take a break from the regular tasks of the day, attend scheduled activities, or just talk.