I attended a networking breakfast that was organized for professionals involved in different areas of the senior industry. I was asked by the leader to share the greatest challenge that I was currently experiencing with my business. I didn’t have to think too long to respond.

So what is the impact of facilities converting entire floors to short-term rehab? Many of the nursing homes making this change are not currently accepting any long-term residents. The long-term residents who currently live in the community are slowly being transitioned from their current floors and moved to another floor. So now there is a shortage of long-term beds at selected communities. The certification change to short-term beds results in not only a smaller number of long-term beds, but fewer beds that are certified for Medicaid (public aid).

I can’t say that I blame the communities for undergoing this change. Several nursing home Admissions Directors have told me that Medicaid is at least 9 months in arrears for reimbursing them. It is no wonder why nursing homes are asking for one to two years private pay before a resident applies for Medicaid. What does the future hold? My real life story will tell you what to prepare for. 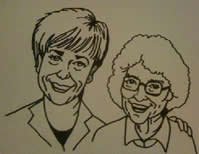 My client had her 75 year old spouse in a rather upscale assisted living community. She admitted that placing him there was a mistake because she really couldn’t afford it. But, she had acted out of desperation and was sorry she had not known earlier about my services. She could afford to pay privately for him to live in a nursing home for several months, but would have to seek the assistance of public aid. I was instructed to find a home that was either close to her home or near his children who lived about 40 miles away.

I contacted my first choice in communities near his children. I was informed that the community was not accepting any long-term residents because it was converting beds into short-term rehab beds. I contacted at least 20 other communities between the two acceptable locations and received the same answer.

How did I solve the family’s problem? I found 2 communities that could accommodate the senior’s needs and accept Medicaid after several months of private pay. One was a community that is very nice aesthetically and delivers great care. It was half way in between the wife and children. The other option wasn’t as nice aesthetically, yet delivered good care and was less than a mile away from all his kids.

The decision was made to go with the second community because it was closer to his children. Due to the shortage of beds, he agreed to move into a room with 2 other roommates. It meant that much for him to be near his kids!

In the end, the spouse told me that the Admissions staff said that their relationship with me and the number of residents I placed in their community had played a part in their decision to accept him.

Happy ending aside, this isn’t a pretty story, and I’ve gotten a dose of what the future holds. I was just pleased to be able to solve my clients’ problem.

Let the senior living experts at Andrea Donovan Senior Living Advisors show you how we can ease the burden on you and your loved ones! Call us at (708) 442-7174 or email us. Please watch our video to learn how the process works and learn what some clients have to say.